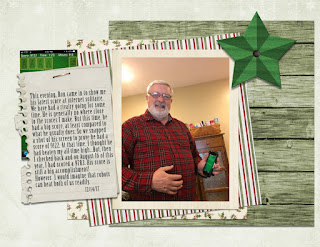 This evening, Ron came in to show me his latest score at internet solitaire. We have had a rivalry going for some time. He is generally no where close to the scores I make. But this time, he had a big score, at least compared to what he usually does. So we snapped a shot of his screen to prove he had a score of 9122. At that time, I thought he had beaten my all time high...But, then I checked back and on August 16 of this year, I had scored a 9783. I don't have it in me to tell him...but it is still a big accomplishment!  That is, until we compare our scores with some of the high ones listed. The only thing I can figure is that those are made by computers instead of people...well that is my excuse anyway.