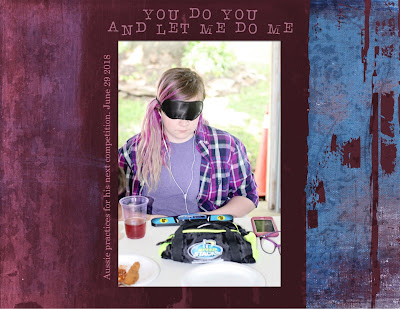 We have triplet grandchildren. But although they are siblings the same age, they have their own talents and personalities. Aussie definitely has his own persona. Here he is at a family reunion of sorts practicing for a Rubik's Cube competition. In case you haven't seen it here before, he does quite well and even hosts his own event in Nashville, TN. The mask is really impressive, as he works it completely blindfolded. Of  course he looks at it first, then without making any moves, dons that blindfold. He also races to see how fast he can do it. Impressive!

When I tried to do a Rubik Cube, which my dad did when I was much younger, I just got a headache. Not just once, but other times over the years as well. However Chelle, Aussie's mother, can work one and so can her younger brother and his son, who is 8. My mind just doesn't work like that. Of course at my age, sometimes it doesn't seem to work at all.