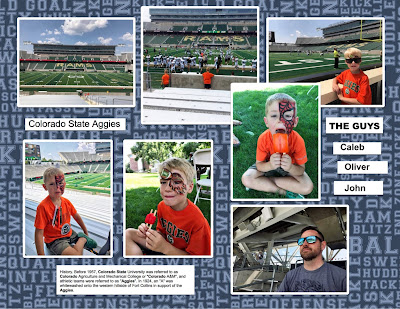 It was a special  game.  Could it  have been the first game of the season? I don't know, but it was quite an outing for these guys. Caleb and Oliver have on their Aggies shirts. I've included the history behind them calling themselves the Aggies when the team is the Rams. It goes back before 1957 when Colorado State was called Colorado Agriculture and Mechanical College or Colorado A & M.
Can't beat the game  being accompanied by face  painting and pop cycles.

It is well into the season now. And Caleb is on a team. They have not yet played a game, but  I imagine it will be soon.
Posted by cropalot at 10:40 PM