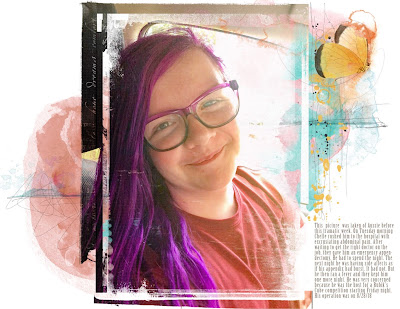 This  picture makes me smile...the story on the page doesn't. However it does have a fairly good ending. Here is the story  I wrote on the layout:

This  picture  was taken of Aussie before this tramatic week. On Tuesday morning, the 28th of August, Chelle rushed him to the hospital with excrusiating abdominal pain. After waiting to get the right doctor on the job, they gave him an emergency appendectomy. Naturally, he had to spend the night in the hospital. The next night he was having side affects as if his appendix had burst. It had not. But he was running a fever and they kept him one more night. He was very concerned because he was the host for a Rubik’s Cube competition starting Friday night.

He did make it Friday night to get things started. He also made it on Saturday. He was exhausted, but people chipped in and everything went as well as could be expected.

Now we just pray he is well rested before he has to start back to his junior year of high school Tuesday morning and his college class Wednesday night.